Continuing with our theme of airport-based activations, in this EventStream we will be taking a look  at a collaborative activation at Gatwick Airport. Disney and World Duty Free have combined to create a six-week activation in the London airport, in anticipation of the launch of Star Wars: Rogue One on 15th December.

Rogue One: A Star Wars Experience

The launch event on 23rd November saw YouTube influencer Jack Maynard and a host of imperial troopers open the new VR experience in the main ‘contentainment’ area, which transports travelers across the Star Wars universe.

World Duty Free have released a line of Star Wars themed products to compliment the launch, including Lego and fragrance sets. The stores are allowing customers to store large purchases ready to collect on their return journeys, saving valuable luggage space.

It’s safe to say that the Empire has taken over! The campaign has adorned walkways throughout the airport with floor to ceiling graphics of scenes from the film. In addition, the original costumes of the five main characters will be on display for the duration of the campaign, in the South Terminal. 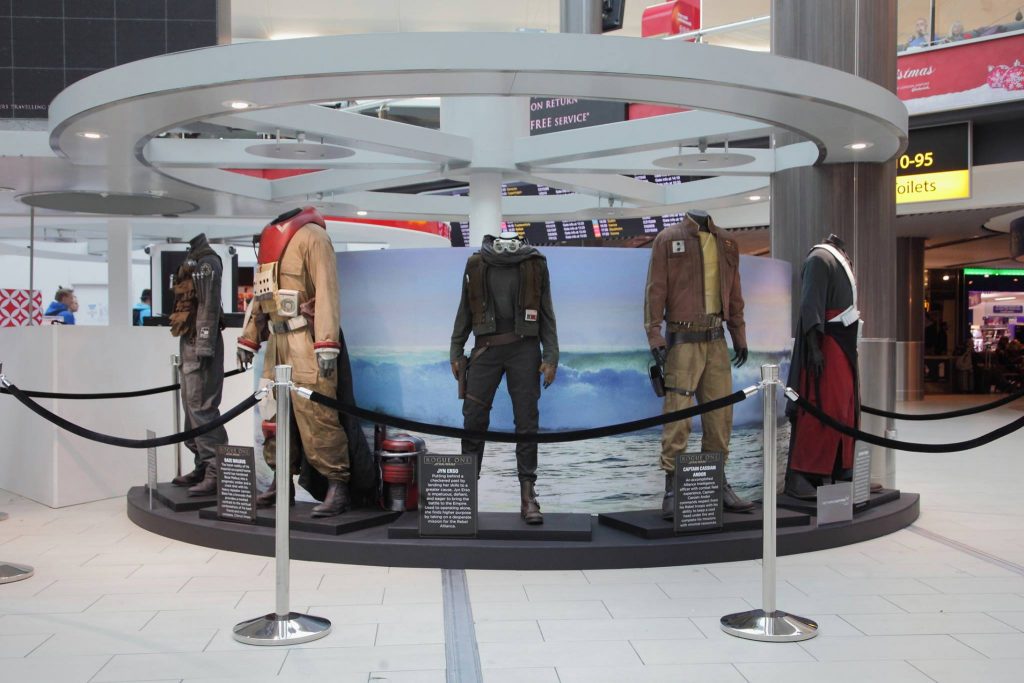 With a total of 48 different Star Wars media and marketing sites, this is a huge campaign, taking over a year to plan. Dufry Divisional CEO UK, Central and Eastern Europe Eugenio Andrades said:

“Our special thanks go to Gatwick Airport, who have worked in close partnership with ourselves, Disney and Lucasfilm to facilitate the installation of this experiential activity and amplify it at all relevant points on the customer journey. This ‘trinity’ approach has enabled us to align our individual objectives and stage a spectacular experiential activity which will be seen by 5.3 million people who will be visiting the airport and our store between now and 17 January.”

The campaign will feature total integration of advertising, experiential marketing, a social media competition and content marketing to deliver a complete, holistic campaign. The campaign comes as part of a 4 brand push of the latest installment in the storied franchise, with O2, Gillette and Kaspersky all running their own campaigns.

The activation is running until January 17, with more surprises to be revealed.

For more content, check out our latest blog articles. Or if you’re looking to run an experiential campaign and need support or staff, contact us today, we’d love to help!